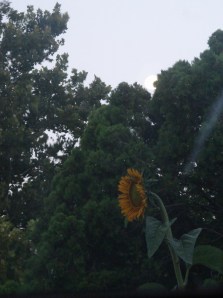 Out my west window a Jack-in-the-beanstalk Sunflower bathes in moonlight.  Further west, far beyond sight, my youngest son flies home.

It feels good to reread these words, to let them sink under my skin, to become absorbed by heart and mind.  The time apart went fast; it’s only in the everyday that time grows still enough for questions.

My one-day retrofit back into everyday life  has made me wonder how Kyle will adjust to being home, after two months in southeast Asia.  From short emails received each week, I know Kyle has been thinking of home.  Kyle’s initial messages focused more on his new life there; latter ones mixed thoughts, always including a note on missing family and home.  At times, Kyle was torn in two, wanting to be there and here too, like when his father’s birthday rolled around mid-way through his Asian assignment.

I expect my youngest son to come home changed.  He will return full of stories to share.  He will carry some sadness at separating himself from daily contact with friends who became family during his absence.   Then there are complicating factors Kyle will face since he will not return to his old way of life.  As a new college graduate, Kyle will be sorting out next steps until he sells his first manuscript.

Up in the air, Kyle is coming down to earth  — by moving back home with me and his Dad.  As I pray Kyle’s landing is not bumpy, I recall Ranier Maria Rilke’s admonition to the young poet to “live the questions now.”  Rilke’s advice wears well one hundred years from when he first offered it. 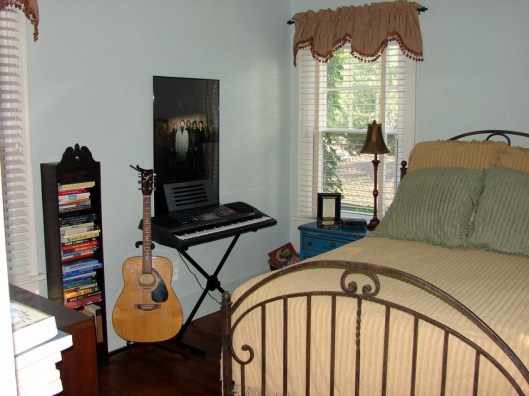 As is my nature, I prayed yesterday with broom and dust cloth and soap and water too, preparing Kyle’s room for his return.  Going two steps further, I created space in Kyle’s closet for clothes he’ll bring home; I replaced treasured artwork with posters Kyle brought home from college.   With dust removed and fresh bedding on, his room is ready for use.  Kyle’s cell phone is charged and his laptop connected.  But how pray, do I ready myself?

I don’t kid myself that the long hours spent creating Kyle’s physical space was my part of Kyle’s re-adjustment equation.  What will be harder is to grant Kyle emotional space to sort out changes in himself, especially new views on his old home.  Can I master the fine art of being available to listen without succumbing to mother-hover?   Or not being invited to listen at all?

It will take time and space all around.  It will take holding off some of my questions until Kyle frames his own.

When I posed this question to a friend a year ago, her face clouded up to deliver a surprising response;  to her way of thinking, people were living large when they owned big fancy homes and drove luxury cars.

Her reaction was so far from my own that I decided my thoughts about the phrase had been wrong.  And rather than testing it further, I promptly forgot it until this morning, when I ran across similar words in Letters To A Young Poet:

“One just comes to relish them increasingly, to be always more grateful, and somehow better and simpler in one’s contemplating deeper in one’s belief in life, and in living happier and bigger.”

Rilke’s experience “in living happier and bigger”, which he described in his third letter to the young poet, was more what I had in mind, which made me relieved that my instincts about the phrase and its meaning were right  a year ago.  Why don’t I ever trust my own instincts?

For now, I rather think about other questions, and not necessarily questions about the books that have enlarged my life, though like many, I could come up with a short list if I had to.  No, I’m more interested in personal experiences or decisions that have enlarged people’s lives.  So my new question for today is this:  “If you had to name a few life events that ended up enlarging your life, what would they be?”

This morning, I surprised my husband with this question.  My husband is not at all introspective, so we rarely talk about this sort of ‘stuff.’   But because he has this incredible memory and ability to think on his feet, my husband quickly offered me two.  It was no surprise that he first named our marriage — but the second was a surprise – though as he talked about it, I realized the rightness of it.

It happened about nine years ago, upon his return home from one of his many trips to Asia.  I remember he looked me in the eye, and just as serious as he could be, said, “Because you’ve put up with all my business travel without complaint, and because you’ve lived here in Lake Jackson for me these last fifteen years, I’m going to let you decide where we live when we move back to Oklahoma.”

Before granting me this gift, my husband and I had haggled back and forth over where we would one day live — my husband wanted to live either in Norman or in Oklahoma City, while I was pushing for my hometown of Shawnee.  Yet, interestingly enough, once my husband granted me the freedom to choose, I never seriously considered Shawnee – instead I considered the two cities near and dear to my husband’s heart.  Ultimately, the place was less important than the happiness of being together.

But what is important, that I didn’t even know until today, is that my husband remembers the entire quality of our relationship changing for the better when he offered me this spaciousness, this freedom to dictate our place of residence.  He recalls that I became more open with my thoughts and myself, and as a result, that we grew closer.  For my part, I recall how I felt so loved, that he would relinquish his say in this decision to me.

I think this growing closer and more connected with others is part of what it means to ‘live large.’   We realize the truth of John Donne’s words — “No man is an island” —  and we pay closer attention to how our actions affect others, for good or bad.  We hold back our private celebrations out of respect for others who are not enjoying similar successes.   And in these ways, ‘living large’ becomes ‘loving large.’

Of course, all this living-loving large comes at personal risk, as we trust another to do right by us.   And in this way, enlarging events become doorways without windows to see what lies on the other side.  Sometimes, as we step through the doorway, we find ourselves living on the edge, and as we take a step, the edges expand before our very eyes.  And sometimes, like today, long after the doorway is far behind us, to where we can no longer see it and even barely recall it, we look back to see it as the life defining moment that it was.

Living large is full of surprises.

“Your solitude will be a hold and home for you even amid very unfamiliar conditions and from there you will find all your ways.  All my wishes are ready to accompany you, and my confidence is with you.” 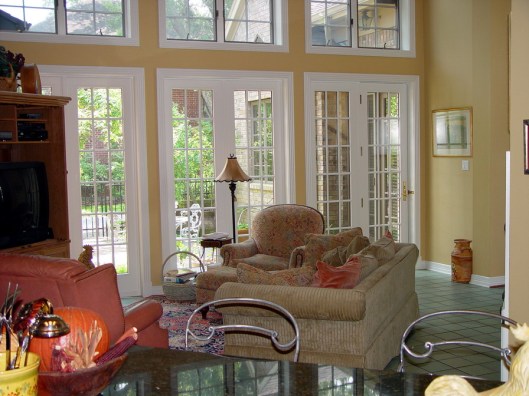 My Quiet Spot in our Texas Home

When I was in my thirties, I lived in the perennial hope of Helen Gurley Brown’s myth that a woman really could have it all.  For me, this entailed happiness and wealth and professional prestige and contentment in family life.  It was a list connected by ‘ands’ —  not ‘ors’.

But no matter how hard I played the game of life, I never landed on the space marked “All,” even though I packed life to the gills and then some.  Too often, my ‘some’ slipped through the cracks of a sad busy life; and ultimately, this led me to reassess who I was and what I wanted out of life.

Seeds of salvation were sown in the quiet moments of a retreat with good friends.  Being surrounded by the deep piney woods of Texas — at a point when I was wondering whether some essential part of me had gotten lost in the chase for worldly success — was a rich metaphor that I failed to grasp until later.

Too focused on digging down to the core of my being — preoccupied with figuring out who I was and who I was becoming – I then had little appreciation for the birds-eye view.  But what is most important to who I am today, I walked out of that quiet weekend with a new sense of direction and a longing for something more.

It is good to retreat from life to take time to reassess life priorities, choices and actions.   However, to find a quiet place to think is not easy where societal noise is so portable, with cell phones and laptop computers, not to mention trains, planes and automobiles.

Away from the whirlpool of noise that drowns out any ability to think, the quiet waits to give life.   The quiet invites me to catch my breath and to expel whatever darkness threatens to eat away at my soul; it helps me to breathe in the aroma of fresh possibilities and reconnect with the truth of my being and the deepest longings of my heart.  The quiet allows me to let go of unwieldy props and masks that make me clumsy and allow me to hide and forget my true self.

There in the quiet, pretense is unnecessary.  I am free to once again seek my truest self and longings.   And to know and claim and wear my true self is so very important, because as Thomas Merton writes, “To know ourselves is the other side to knowing God.”

The Bible tells us it was in the sounds of sheer silence where Elijah heard God when Elijah was in retreat, running for his life from the wicked Queen Jezebel.  It is no surprise then, that it is in the quiet where we best discover out true selves.

But what is the quiet? — what does quiet look like?– and how does quiet differ from silence?   Frederick Buechner offers us answers, as he draws this shimmering definition and contrast out of his book Wishful Thinking:

“An empty room is silent.  A room where people are not speaking or moving is quiet.  Silence is a given, quiet a gift.  Silence is the absence of sound and quiet the stilling of sound.  Silence can’t be anything but silent.  Quiet chooses to be silent.  It holds its breath to listen.  It waits and is still.

“…The quiet there, the rest, is beyond the reach of the world to destroy.  It is how being saved sounds.”