All my “good eggs” have scattered this year.

My husband’s in Saudi Arabia.  My daughters are in route to Chandler to visit their father.  My sons have holed up at their respective residences.  My oldest, I hope, will spend the day resting from a busy tax season… while my youngest, if I had to guess, is working on book number seven of his science fiction series.

Which means, in part, that the approach of Easter has never felt less Easter-ish.  I had no big meal planned.  No special dessert.  No company invited.  So it comes as no surprise, I think, that I should wake up today… waffling on whether or not to attend church.  In the end, I went.  Not out of guilt, though.  I’ve finally reached a point in my life where I attend only when I want to.

Today ended up being more than a “wanting to” sort of day.  Today, I needed to go.  Maybe because the day began too much like any ordinary week day.  Meaning, I woke up early, as I usually do.  I did a little housekeeping.  I fed my dogs and then myself…. and worked through some assigned reading until it was time to get ready for church.

And here, even needing to go, I fumbled at the commitment line.   I don’t know why except that it’s likely tied up with my introverted nature, but I find it difficult to go anywhere by myself.  Today, to avoid going solo, I sent out a “Hail Mary” toss of a last-minute text to my youngest son… inviting him to come with me.  Only when he didn’t respond, did I give in and go by myself.

I arrived to a full parking lot, snagged one of the last two programs for the service, and squeezed into an empty space big enough for one.  In other words, I was far from being alone.  And by the time I walked out the old cathedral where I worship — more weekends than not — Easter had found me.

When Kyle and I connected three hours later, he caught me preparing a traditional Easter ham luncheon for one.  He quickly apologized for not getting my invitation in time…while I was just as quick to assure him that all was well.  We didn’t visit but a minute — just enough time for him to turn down my offer of lunch.  “I don’t know why,” he said.  “But it just doesn’t sound good to me.”  And enough time for me to turn down his invitation to go to an unnamed movie.  “No need,” I said.  “Thanks though.”

It strikes me that it takes a lot of love within a relationship for the parties to feel free enough — free of guilt or whatever, I can’t say —  to speak a simple “no, thanks” to one another.   Lord knows I am not hurt by Kyle not wanting to come over for lunch (or be available to go to church with me, for that matter);  Why I’d rather him come only when he wants to come… and the same goes for all my other good eggs, as well.  I pray Kyle feels the same about me declining his invitation to the movies.  By the same token, I believe God feels the same way about me and my fair-weather attendance at weekend worship services.  Surely, God wants me there… only when I want to be there. 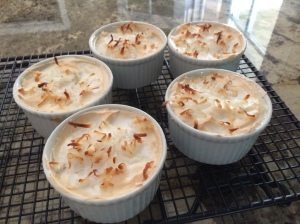 Funny thing about today, though.  I ended up making a nice traditional Easter lunch for myself, even without a big meal plan.  I ended up inviting Kyle to join me, even though it didn’t work out.  And while I had no plans for dessert, somehow, I found myself making one.

I’m not sure when the latter decision happened.  Maybe it was on my drive home from church.  I only know that whenever the idea found me, it came softly and fully formed, as if there all the while, a colorful Easter egg lying in soft, green grass, just waiting for my notice. Because as soon as I walked in the door, I was ready to bake a coconut cream pie.

It didn’t matter that I had no homemade pie crust ready for use.  Nor did it matter when I discovered only one egg remaining in the refrigerator.  No, I wasn’t about to give up my favorite dessert, the one that most reminds me of Mother and all the many wonderful Easter lunches that I’ve been privileged to experience.   In the spirit of serving a Easter luncheon for one, I simply decided to cut the recipe in half. I mixed up half the cream filling, made do with the graham cracker crust that Mother actually preferred, and served it up in ramekins.  They turned out so pretty I think I’ll do it again sometime.

It seems that all I needed for Easter to be Easter… was one good egg.

Separate egg white from yolk — set aside yolk for pie filling. In a medium-sized mixing bowl, beat egg whites and cream of tartar with an electric mixer on high until foamy — add sugar gradually, beating until stiff and glossy. Set aside.

In a bowl, hand mix eggs yolks with milk, then set aside.  In a large sauce pan, mix all dry ingredients with a whisk.   Stir in milk-egg mixture. Mix well and heat on medium high heat, stirring constantly.   Mixture will thicken in 5 to 7 minutes.  When thickened, add flavorings, butter and coconut, mixing well. Remove from heat.
Pour filling into baked pie shell, top with meringue, then lightly sprinkle with coconut flakes. Bake in a 375 oven for 5-7 minutes, watching closely, until golden browned.