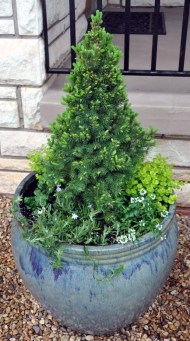 It’s been raining like clockwork — as in spring forward brings spring showers brings Spring indeed.  The lawn is greening, perennials are pushing through soil, bulbs are blooming — or swelling and swooning with bud — while shrubs and trees attempt to steal the lime-light wearing their best feathery green fringe.  Not just in name, Spring is truly here.

What difference a year can bring.

After last year’s drought, I can’t imagine ever regarding rainfall as anything other than the miracle it is.  These days, when I hear the first pinging upon roof vents, everything else gives way.  I can think of nothing better to do than peek out windows and doorways to watch drops of all sizes hit hard scape like a dart board. Dot. Dot. Dot.  The single circles of sound dissolve into a symphony of crackling static; random raindrops swirl to spill liquid, coloring outside of their lines to cover every speck of visible surface.  When it reaches ground, it finally smells like rain — that inexplicably sweet, dampened earth mixed around seed and root that transforms a garden into a dwelling of possibilities.

It’s hard not to look outside without thinking about the changes this small urban property has seen in the last twelve months.  Yesterday marked one-year of ownership.  I no longer think about that uprooting from Mesta Park or the reasons that spurred our twenty block migration north. And while it’s true my bad knee needed a one-story home, I now like to think that this 1950s California Ranch needed me too.

By the time we closed on the purchase, this property had been through a bit of a drought too;  its owners had moved away to greener pastures long before selling it.  And though the house was never ugly to my eye, others didn’t share my opinion.  Why even at first glance, my own dear sister wanted to know what I was going TO DO about those front porch shrubs.  Like every other shrub planted without rhyme or repetition, these were starched crisp at attention in military crew-cut formation…and less I forget, my ‘meet and greet’ plantings were a mismatched set of Mutt and Jeff. 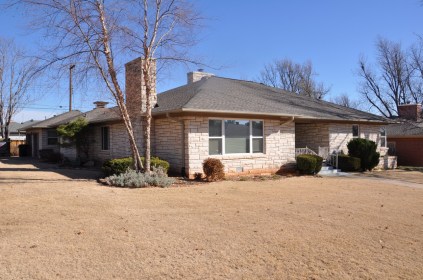 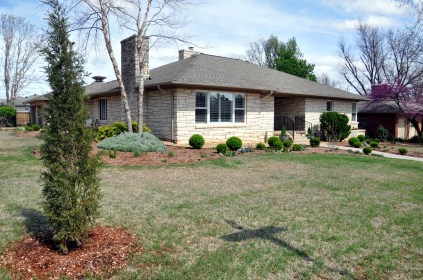 To say the house didn’t ‘show well’ perhaps explains why it languished on the market for a year before we came along.  To borrow words of one new neighbor — the same who walks by my house everyday, just to track the transformations taking place — it had a bad case of the blahs when she saw it during ‘open house.’ 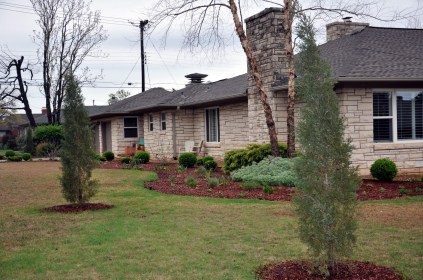 No one says that anymore. 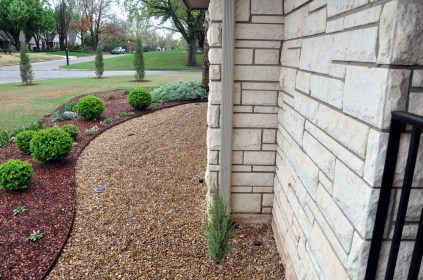 After - Looking Southwest from Front Porch

The all too-many-to-recount changes were created through good, old-fashioned elbow grease — what I once thought my grandmother kept under her kitchen sink —  during the worst drought I’ve ever experienced. 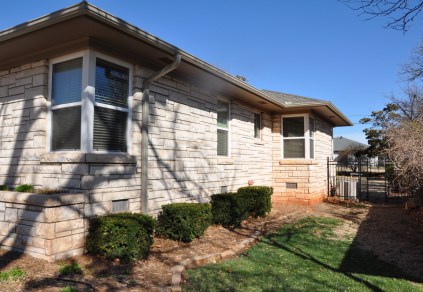 Some changes were subtle while others were expansive.  Yet all were important.  And if I were to do it all again — heaven help me —  I’m not sure what I’d do different.  At least, that’s MY story.  Which is not to say this place is perfect or ever will be. 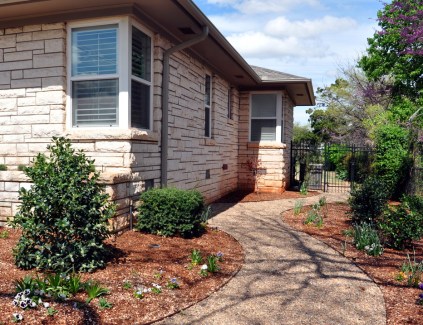 But I’ll crawl out on one of my green-leafed limbs to say it’s perfect enough — perfect enough to last me the rest of my life.  And though I can’t point a finger at the reasons why, I know that the gifts of renewal I’ve showered upon this place have somehow strengthened me too.

We’ve bonded, this house and me, project by messy project.

Why to say this place feels as right as rain, after a long hard drought means something to me this year that it didn’t last.  It means I’m home, darling, in a way that has nothing to do with labels. 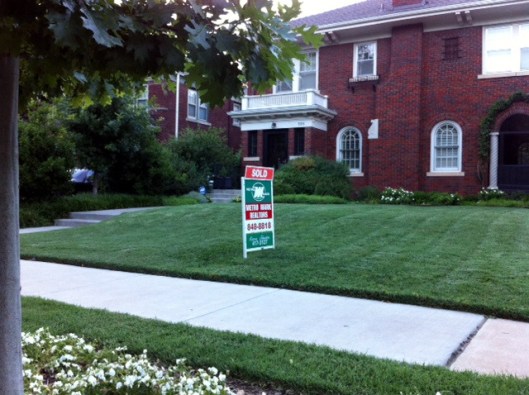 I woke this morning in a new home just twenty or so blocks up and down urban hills from Mesta Park.

The skies, even the air, are clearer today, a parting gift from yesterday and last night’s thunderstorms, in spite of their brevity.  And though not as short, so it is with my latest life storm on everyday life;  from the time we signed the contract on this fifties Ranch-style home almost four  months ago to yesterday, when we signed away the deed on our Mesta Park beauty, I have watched and helped tear apart one life to begin anew.  I watched dust stir to fly like small tumbleweeds to settle snug again, more than I ever thought possible; I am finding knick-knacks and furniture that once fit so beautifully there appear awkward and out-of-place here in their new more modern digs; 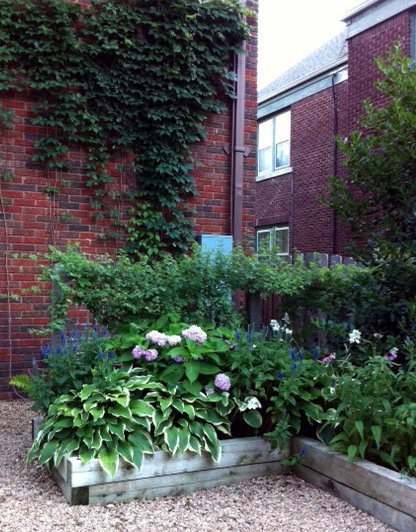 and the gardens there, so beautiful yesterday as I pulled weeds and worked the soil one last time seemed to mock me and my decision to part company.  They need not have bothered, for the gardens here, this strange mish-mash without form or unity, underline and highlight so well what I chose to leave behind.

And here am I, settling into this little computer niche in a hallway, without a lovely old wood window to look out of, once again picking out thoughts to leave behind in my blog as a string of words.  I confess it all feels surreal.  Part of me says, “oh, what have I done?” while the other says, “thank God for houses with no stairs.” 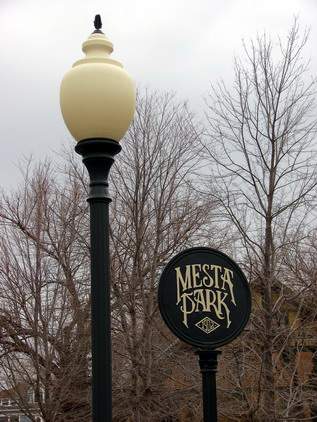 I deeply love this old neighborhood — the one I call home — the one most call more formally by first and last name:  Mesta Park.

While it’s never easy to describe why, I always begin by pointing out  its central location, how it’s within easy walking distance of downtown.  And how by car, with nearby access to two major highway arteries, I can get anywhere in the city in 20 minutes or less.  (After years of driving Houston highways, I count this no small miracle.)

I like how whether I head north or south, it’s close to fine dining and local art and entertainment districts.  How residents need walk only a few blocks to grab a good cup of coffee.  Or something to eat from the many local cafes and bakeries that dot its crisp rectangular edges.  There’s a quaint charm afoot, when the neighborhood’s one small grocer and several churches sprinkled here and there allow most to cover daily needs of nourishment with only their “Chevrolegs.”

Life in Mesta Park is definitely slower — more so than other parts of the city, even those a mere three miles up the road by Penn Square Mall.  Residents excuse people for thinking otherwise, nestled as it is, against shadows of skyscrapers.  But more than slow, the neighborhood pulse is also steady — as a historic district, one can rest assured that the house next door will not schedule a date with a wrecking crew any time soon.

When traveling over Thirteenth Street — the historic district’s invisible drawn lower boundary — it helps to regard the crossing  as time travel.  It matters not whether carried by memory or imagination — one will arrive securely embraced by small town Americana — early twentieth century.  It’s a place where endless old shade trees line the curbs to attend the parade of neighborhood life.  It’s a place where patriotic banners proudly hang from beams of front porches — still well used.  And summer ice cream socials still gather neighbors in the park.   Where one finds residents – both two and four-legged – barking out friendly greetings as they pass on the sidewalk; voices of children chirping as they ride bikes to the park or sit behind  their lemonade stands, waiting for thirsty customers they know will stop.

Living here schools me in patience.  The neighborhood is home to many different stages of life and the houses and gardens do a good job of telling who lives where.  Immaculate lawns and gardens spell retiree or the absentee rich with hired help or perhaps a passionate gardener.  And while the neighborhood has more than its share of finely manicured lawns, most land somewhere near the “good enough” category.  It’s easy to imagine owners of these places spread too thin — trying hard to cover all the bases but running out of steam somewhere between third and  home plate.

Then there are those other yards practically begging for an explanation.  You know the  ones — talked about behind their backs rather than lent a helping hand.   Sometimes, when seen kneeling in the dirt of my own gardens, a passer-by will strike up casual conversation.  A few sentences in, they’ll pose their question, punctuated with a finger-point or nod of their head, “What’s the story on that corner house over there?”  And playing the part of mother to child, I’ll tell them what they already know but for some reason only God knows, like also to hear from me; something along the lines of how these neighbors of ours will get around to “it” sooner or later; and if too late of later, when reported to the City for having foot-high weeds.

Soon, it will be me passing through this old neighborhood on my way to a new-old home uptown from here.  And though I won’t stop to ask questions, I hope to always stop — at least mentally — to recall how lucky I once was to call this place home.   This old neighborhood and I go way back — every since it captured my childish heart while gazing out the window from the back seat of my parent’s mid-fifties Chevrolet.

Neither time nor space can change that.  It never has.  And I suppose it never will.