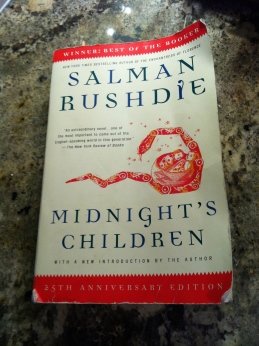 So why pickle jars?  And not the exotic people, places and things introduced into my mind, by the magical writing of the now-you-see-it-now-you-don’t author, Salman Rushdie? (Can anyone use that “writery” trick of foreshadowing as effective as he?)

How can it be that it’s the image of thirty-one pickle jars trumping all else, in the end?  Especially that one.  You know.  On the end.  Empty and waiting.

“Twenty-six pickle-jars stand gravely on a shelf; twenty-six special blends, each with its identifying label, neatly inscribed with familiar phrases:  “Movements Performed by Pepperpots,” for instance, or “Alpha and Omega,” or “Commander Sabarmati’s Baton.”  Twenty-six rattle eloquently when local trains go yellow and browning past; on my desk, five empty jars tinkle urgently, reminding me of my uncompleted task. But now I cannot linger over empty pickle-jars; the night is for words, and green chutney must wait its turn.”  —  p. 443

Pickle jars represent chapters; thirty full jars equate to thirty full chapters of the novel.  Thirty full chapters of the narrator’s Saleem Sinai’s life.  So full —  not of preserved cucumbers — but of a cucumber-nosed narrator’s stories, dreams and memories truth.  Artfully told.  Artfully preserved.  Artfully titled, with chapter headings that hide as much as they reveal; “Movements Performed by Pepperpots,” for example.  Hmmm.  What might that concoction smell and taste like?

I wouldn’t have written these words twenty days ago. Because the words and ending felt flat first-time around.  The final bite of words left a bad taste in my mouth.  Like onions that linger to overstay their welcome.

I expected something spicy.  Something like all that had come before.  After all, I had followed the narrator through India, Pakistan and Bangladesh —  through the ups and downs of his dramatic “India-talkie” life.  And like a child-soldier, I longed for a little more “Ka-pow’ for the finale.  Know what I mean?

I should have known better.  By now, I should have known Rushdie better.  Because, as with Books One and Two, it’s the second reading where appreciation for Rushdie’s novel grows, where chapter contents begin to meld into flavors both fabulous and subtle on the tongue and mind.  Cucumbers, after all, are not pickles overnight.  And neither are Rushdie’s pickle jars of stories.  They require time and space to appreciate fully.

“One day, perhaps, the world may taste the pickles of history.  They may be too strong for some palates, their smell may be overpowering, tears may rise to eyes;  I hope nevertheless that it will be possible to say of them that they possess the authentic taste of truth… that they are, despite everything, acts of love.” p. 531

Truth.  Again it’s truth.  Truth floating up and swirling all around.  No longer truth in general, but truth in particular.  Truth as it’s embodied in a particular person.  Truth as it’s embodied in the narrator, Saleem.   And truth as it’s lived out (or not) by a country’s leaders. Military might as well as political power.  India.  Pakistan.  Eeny.  Meeny.  Miny.  Moe.    But rather than summarize, I prefer to get out-of-the-way, and let the Master Magician pull those ‘true-self’ “Rusdie-isms” out of his own top hat.

“Don’t you remember really?  Nothing? Allah, you don’t feel bad.  Somewhere you’ve maybe got mother father sister,” but the buddha interrupted him gently:  “Don’t try and fill my head with all that history.  I am who I am, that’s all there is.” [emphasis added] p. 403

“In the aftermath of the Sundarbans, my old self was waiting to reclaim me.  I should have known:  no escape from past acquaintance.  What you were is forever who you are.”  [emphasis added]  p. 423

“I no longer want to be anything except what who I am.  Who what am I?  My answer:  I am the sum total of everything that went before me, of all I have been seen done, of everything done-to-me.  I am everyone everything whose being-in-the-world affected was affected by mine.  I am anything that happens after I’ve gone which would not have happened if I had not come.  Nor am I particularly exceptional in this matter; each “I,” everyone of the now-six-hundred-million-plus of us, contains a similar multitude.  I repeat for the last time”  to understand me, you’ll have to swallow a world.” [emphasis added] p. 440-41

Simply beautiful.  Don’t you think? But as I said at the beginning, it’s the ending jar that gets me.  The jar that remains empty, since it represents the narrator’s future. And not just Saleem’s future, but my future, too.  And your future. And all of our futures.  Eeny.  Meeny.  Miny.  Moe.

Last days.  Last words.  Last breaths.  And then, eternity.  Yes, in the end, knowing ourselves — our true selves — requires accepting our own mortality.  Our own emptiness.  Our now-you-see-us-and-now-you-don’t selves. Which reminds me of Rushdie’s fabulous take on the after-life where we get a taste of invisibility through Parvarti’s magic tricks…. p. 438-39

And so much else, that I’ve no time to go there….

Note 1:  For other book reviews, pop over to Arti’s place and follow the links.

Note 2: All page references are based on the 2006 Random House Trade Paperback Edition.

The last two months I’ve immersed myself into the part of my father’s life he lived before my birth.

Strange that now, out of left-field, comes another thought — maybe because it was Dad’s birthday not long ago — and the second anniversary of his death not long ago, too —  and Father’s Day coming up making three — a thought about the part of life we did share together;  especially words I finally shared when Daddy laid dying — of how I’d always found him handsome, from the time I was a little girl, and how I always wished that somehow I could marry a man as good-looking as he was — and I think — no, I’m sure — I surprised my father with that wobbly left-field confession.

Why is it, I wonder — I mean, what caused me to wait and sit on these lovely words rather than sharing them with my father in real-time?; why did I instead choose to speak of bank statements and pancakes and old black and white movies rather than speak aloud of childhood dreams which carried the greater weight? 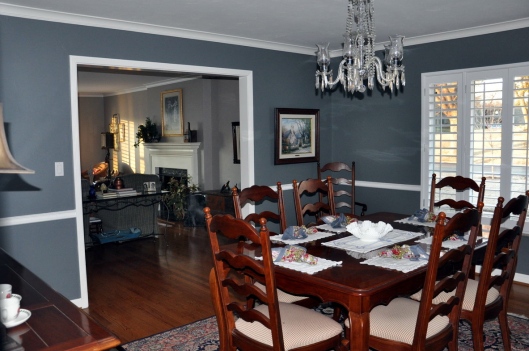 Huddled around the table were men close to my mother-in-law’s heart — my husband, two sons and Janice’s husband Ray —  with Amy and I making six.  It was our first dinner without her.  So I kept numbers small — in hope of making conversation easier.

The dinner menu was less important that the diners, though I did spend hours in the kitchen trying to make the most mouth-watering meal I could.  Not only did I make Ray’s favorite Zucchini Squash Casserole but I made sure to avoid any dish that would remind too much of Janice.  It was way too early to serve any of Janice’s favorite foods, like the chicken-fried steak she heavily favored.

Our dinner conversation wasn’t memorable.  Just the usual mish-mash of words spoken in response to questions about how work was going or something or other about the weather or how Kyle’s truck Betsy was running.  Followed up, of course, by the standard fare of favorite topics like how the Pokes were doing or how the Sooners were doing or how the Thunder was doing.

We failed to talk of how we were doing.

After dinner, conversation was much the same.  Until Ray began talking about new routines at home.  Until I responded by saying something about Janice.

Yes. And though I said it as natural as breathing, I don’t recall what words preceded Janice’s name and what words followed after.  I only remember saying, “Janice.”  And then the silence that swallowed up her name.

But I also remember what happened after the silence: I remember how Ray’s surprise softened into something like relief, and that he began to share a few stories about Janice that were important to him.

It was good, I think, for Ray to talk of Janice.  And it felt good to hear Ray’s talk of Janice.  To speak and hear of her was the best we could do.  Why it out-shined everything else about the evening — even that squash casserole I troubled myself over. 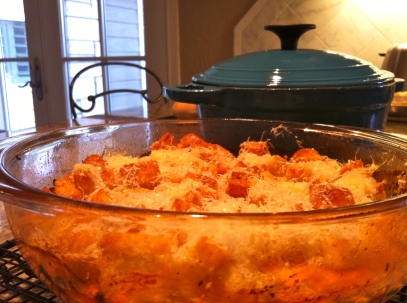 Slice tomatoes over bottom of an ungreased 9×9 casserole dish.  Sprinkle brown sugar and salt over tomatoes.  Add 1/2 of onion and 1/2 of zucchini.  Cover with 1/2 of grated Velveeta cheese.  Repeat layers.  Cover with foil or casserole lid and cook for 1 hour at 350.  After one hour of baking, remove foil, drain off excess water in casserole (leaving some liquid), add croutons and Parmesan cheese to top of casserole.  Return to oven (uncovered) for final 1/2 hour of baking.

Sauté bread cubes in butter and garlic salt in a skillet over medium heat until toasted.