“… I also remember Grandma baking lots of sugar cookies, lemon pie and candied sweet potatoes, but I’ve no recipes for these.  Grandma just threw these things together from memory.”

Five days gone from the Florida Keys and I’m not ready to write of my visit in any serious fashion.  Instead, I’ve been catching up on the life I missed and catching up on birthdays I missed, while key memories wash in and away from the shores of my mind.

Celebrating birthdays once had me making home-cooked meals for each of my children and their families — I’d prepare whatever the honoree selected from my standard “menu” of meals.  That stopped in the year of Daddy.   And carried on through the Summer of Sis.  And the very long difficult year of moving uptown twenty blocks and the grief that followed in the wake of dying relationships.  Was that just last year?

The straight-up story is that the part of me that used to relish making birthday dinners for everyone just quietly died.  And that these days, I celebrate family birthdays more quietly.  Smaller gatherings.  Smaller meals.  Sometimes a special restaurant.  Or maybe I’ll make some sweet dessert.  And when desired, I’ll help my children pull together birthday dinners for their families.  But usually, I limit home-cooked birthday meals for the two I share home with — unless away from the home-front, like last week.

My youngest, who still calls my home his, turned 24 on the 12th, when we were  walking up and down the party street of Duval in Key West. So last Friday I arrived home with need of cooking Kyle a birthday meal.  By then, already two birthday meals in the black, he was still happy to redeem my guilt, once I offered up two of three favorites — home-made calzones followed by twenty-four chocolate chip cookies — fresh from the oven.

Only later did I wonder whether Kyle might have preferred his favorite fried shrimp. For some fishy reason, I never thought “shrimp.”  Maybe it had to do with all that seafood my husband and I enjoyed last week? — but the idea never floated across my mind.  Until later.  Until I stumbled across frozen bags of Wild Key West Pink Shrimp while shopping at Whole Foods. 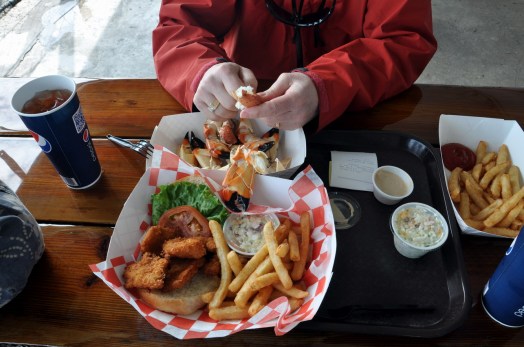 We’d hope to stumble across these ‘not-to-be-missed’, “sweet pink shrimp harvested from the crystal clear waters of the Florida Keys” while IN the Florida Keys last week.  But no.  Instead, all up and down the Keys, not once did we find these sweet pinks offered on the menu.  But being good sports and all, we kept ourselves busy trying conch and stone crab, then dining on shrimp and Yellow-tail Snapper and Mahi-mahi and Grouper, every seafood meal long hoping to catch sight of the words — Key West Pink Shrimp — printed on the menu.

It took dining at Southern Living magazine’s “pick” for Key West Pink Shrimp for me to raise the white flag.   Not finding them again, I asked our server, half expecting they might be an ‘off-menu’ item.  Instead, she gave us a shocking pink shrimp tale —  how they’d been taken off menus due to unsteady supplies.

At the time, the story seemed plausible.  Even though it didn’t mesh with Southern Living magazine’s recent write-up on the Keys, reporting “these succulent crustaceans are available year-round.”  But now I’m not so sure.  Seeing all those frozen tails while fishing the aisles of my local grocers, I’m thinking pink shrimp could be a sister to that other Key delicacy made with limes and a graham cracker pie shell; because both appear to lack straight-up stories.

Where can I find Key West Pink Shrimp in the Keys?  Here’s a home-made shrimp tale I’ve spliced together:  Nobody knows like we do — at Whole Foods.

When it comes to being best in pie-making, the stories coming out of the Keys have nothing on my family’s.  A somewhat friendly sister rivalry had Aunt Jo tops in the categories of Pumpkin and Pecan and Mom with Coconut Cream Pie.  And though both made their best version of lemon pie, no one, but no one, made lemon pie like Great-Grandma Taylor’s.  Why more than fifty years after her death, we’re still talking about that pie, though most of us never tasted it.

But Mother had.  And so had Jo. And I suppose both sisters loved that lemon pie enough to emulate.  Perhaps this explains why Mother especially favored a particular tale about a lemon pie even more, since it raised questions about the fineness of her sister Jo’s pie-making abilities.  Mother told the story often — whenever Sister Jo wasn’t around — and last Monday, while four of us shared a lemon cream pie I made for Jane’s birthday, we relished the tale again.

Jane remembers the story taking place at a long-ago Mother-Daughter banquet held at Rock Creek Baptist Church.  Her mother — the woman we grandkids called Granny — sat with her three daughters — Jo, Mother and herself — with Great-Grandma sitting next to Jo.  It was likely not a catered affair since Aunt Jo contributed a lemon pie for dessert.  And because she knew Great-Grandma’s particular fondness for lemon pie, Jo offered to get her grandmother’s dessert; and, without mentioning she had been the pie-maker, Jo presented Great-Grandma a slice of lemon pie.

To this day, nobody knows why Jo kept her lemon pie-making a secret from Great-Grandma Taylor.   Perhaps she’d hoped Great-Grandma would rave over it, or maybe she wanted her pie to stand the test of an impartial judge.  But never hearing Jo’s side of the story, I can only report that a few bites into Jo’s lemon pie, Great-Grandma leaned into Jo and whispered in her ear, “I don’t know WHO made this lemon pie, but they sure were stingy with the sugar.”

Being on the end of a straight-up answer — Jo might say —  is perhaps not all it’s cracked up to be.  Especially when it’s stingy with the sugar and just a bit tart.  Like Great-Grandma’s famed lemon pie.  Or like Great-Grandma herself.  And maybe like my version of that famous family pie without an official recipe — that for the record, one might call, an ‘off-menu’ item of mine.

Separate egg white from yolk — set aside yolk for pie filling.  In a medium-sized mixing bowl, beat egg whites and cream of tartar with an electric mixer on high until foamy — add sugar gradually, beating until stiff and glossy.  Set aside.

In a small bowl, beat egg yolks with salt and water and set aside.

In a large saucepan, mix cornstarch and 1 cup of sugar.   Add hot milk and mix with whisk — cook over medium-low heat until thickened.  Add enough cooked filling to bowl of egg yolks — when well-mixed, return egg mixture to the remaining pie filling and simmer until egg sets, stirring constantly.  Add butter, lemon juice, rind and vanilla and stir until mixture begins to bubble.  Remove about a half cup of meringue and stir into pie filling.  Blend until lumps disappear — over beating will cause the mixture to lose its fluffiness.  Pour filling into baked pie shell and top with remaining meringue.  Bake in a 425 oven for 5-7 minutes, watching closely, until lightly browned.