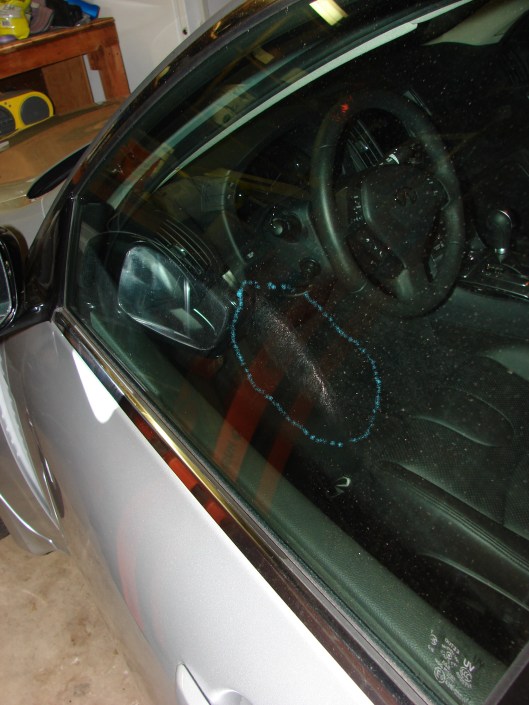 A jogger ran into this evening.  Literally.

It happened while we were on our way home from a fast-food dinner.  My husband had just stopped our car at the intersection of Northwest 18th and Walker.  We had almost cleared Walker when out of nowhere, a jogger sideswiped us.  He hit our front driver’s side window with enough force to shake our moving car, leaving an imprint of his sweaty forearm.

My husband replied.  “Someone ran into the side of us.”

My husband pulled our car to the curb.  We stopped directly in front of the first house on the north side of the block.  My husband rolled down the window to talk with the runner.

“What?  Is he okay? Where is he?”  When excited, one question never does it for me.

Looking into his rear view mirror, my husband said, “He’s behind us.”

The runner was busy taking a photo of our vehicle license plate.   He didn’t make us wait long.  The runner jogged back to the rolled down window, and while continuing to jog in place, started yelling and cursing at my husband.

He began by accusing my husband for f—king running the stop sign.  My husband said, “I did stop.  Did you?  You also had a stop sign.”  My husband pointed his hand at the four-way stop sign at the intersection.  Before crossing 18th Street, the runner should have stopped.

The runner replied, “Pedestrians don’t have to f—ing stop at stop signs.”

The runner was young.  Mid to late twenties, maybe.  Definitely hot and sweaty.  He may have been tired.  By the looks of his ear phones, perhaps he was distracted by whatever device he was listening to.   Was it an I-phone?  Maybe.  It was probably the same device he used to snap that quick photo of our license plate.

Had the runner not been tired and distracted, surely he would have realized that it was he that ran into us.  Not the other way around, as the young runner accused.  Our car doesn’t travel sideways.  Had we hit him, the runner would have been hit by the front of our car.

After a few more cross words, the jogger ran off into the night, continuing his northerly path up Walker Avenue, seeming no worse for his running into us.  By the speed at which he left us, nothing appeared to be injured.  Other than his pride.

I hope he makes it home okay; he was wearing hard-to-see dark jogging attire.  Black, I think.  It would be so easy for any car to hit him — he blends so well with the night.  His parting shot was that he’d be “in touch.”

Was it his words or his tone that I found so ominous?   All that searing.  Raw emotion.  Accusations.  It leaves me feeling threatened.  Shaken.  So sideswiped by his words.

Still, I’m thankful he wasn’t hurt.  If only “our” jogger could feel the same.

9 thoughts on “Sideswiped and Shaken”