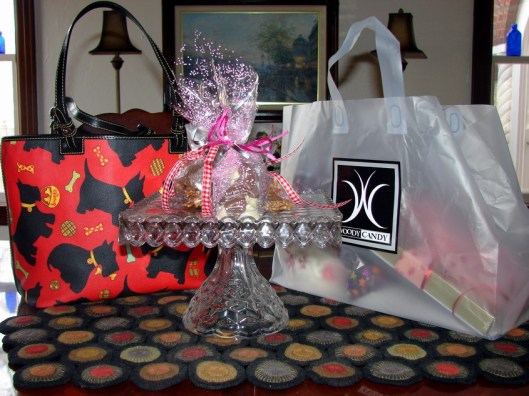 The purse I carry is a conversation starter.

People come up to me to tell me how cute it is or how they’ve seen it on television.  Sometimes they share a word about their Scottish Terrier — or maybe how they once had a Scottie or would like to have a Scottie someday.

Sometimes I’m asked if my purse is a Dooney & Burke.  The question surprised me at first.  Because I wouldn’t know the family line of one purse from another unless it happened to be on a labeled display.  And since I’m not too much on labels —  I’m about as unfashionable as a girl can be — this big purse has introduced me to a whole new circle of fashion conscious shoppers.

These days I field the question like the expert I’ve become — “Yes, it is,” I say, “It was a birthday gift from my sister.”   As soon as I say it, I can tell they’re thinking, yep, that explains why she’s wearing a pair of tacky warm-ups with this purse.  And if their also thinking that my television star purse deserves to be in the company of one whose a bit more pulled together…. well, I couldn’t agree more.

My most recent introduction by the D&B  occurred this week, when I was shopping in my favorite local candy store.  Most of the company’s business is wholesale, but the owners keep a small retail outlet for local shoppers that opens a few times a year, mostly around the holidays.  Clyde Woody, Jr., the company’s owner, recounts its history, on a local website:

Woody Candy Company was founded in 1927 by my parents. We are the oldest continuing candy manufacturer in Oklahoma and proud to have been a one family business for 82 years. We use the finest wholesome ingredients and 82 years of experience to make the most delicious candies available. Fresh butter, cream, peanuts, pecans and almonds…we make every effort to make candy the way our grandmothers did, but we make it everyday and a lot of it.

Well, the lovely woman who noticed my purse was married to Mr. Woody, though I didn’t find out until after we had talked fifteen minutes about dogs — her Scottie and mine, her Standard French Poodle and mine, and her hopes to add a new puppy soon and my promise to connect her to two reputable breeders with new litters of puppies.

Well, I couldn’t leave Mrs. Woody’s store without telling her who and what had sent me to her store.  It was obvious I’d come for Valentine’s candy, but she didn’t know that my six-year old granddaughter had called me up one night late with the sole purpose of finding out WHERE I had bought that good candy I had given her for Christmas.

Karson had eaten half of her solid chocolate Santa by the time she had called, but was rationing the rest to keep from running out.  So as soon as I told Karson that the candy store was close to my house, she was ready to go, even though she lives half an hour from my house in the opposite direction.  Of course, the store wasn’t open at eight o’clock at night anyway.  But any little candy shopper as discerning as Karson deserves the treat of shopping at this little boutique candy store.  Maybe I can make that happen for Easter.

In the meantime, shopping karma all around for Saint Valentine’s Day:  Karson got her candy “on the house;”  my lucky husband will get his candy tomorrow — white chocolate pretzels and a box of turtles.  And Mrs. Woody now has a few leads on a sweetheart puppy.

If all my shopping could be this fun, I might go more often. 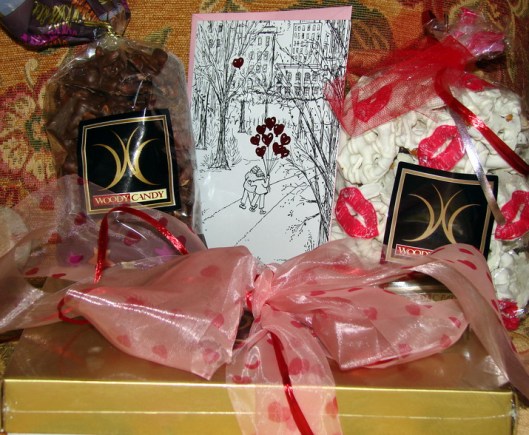