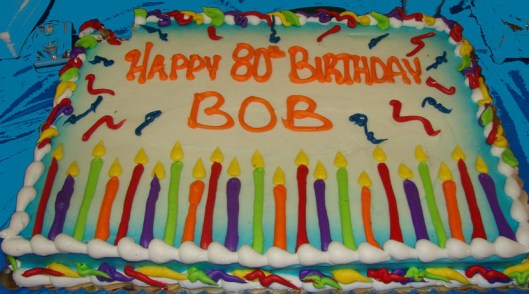 The church hall was full of well-wishers.

How many of them, I wondered, would have ever thought my uncle would be celebrating his eightieth birthday today.  Not many, I’m guessing.  Yet, here he stands defying the odds  —  how many years later?… and how many times?… from what many believed would be his deathbed.

Yet, even today, in the midst of this birthday party, I understand my uncle isn’t feeling well.  But to look at him smiling and his eyes twinkling and his arms reaching out for one long hug after another, no one would ever guess what was going on underneath.

I think this is how it is with folks of my uncle’s generation; — it was the same with my parents — they keep their troubles to themselves.  They realize that there is a time and place for everything and today was not a time for sharing pain.  Instead, today was all about joy  — a time to remember and honor a life still being lived.

Propped against the tables were old photos — I’d forgotten than my aunt and uncle were once in a bowling league in the sixties.  How young they looked then, Bob barely thirty and JoAnn not yet thirty.  These two have been part of my life from the beginning, of course — and though I remember them in the 1960’s, I don’t remember them looking like this.

What I do remember is that I always thought my aunt and uncle were rich; and in a way, they were rich, when compared to my family.  They always seem to drive a new car every couple of years, they went on long vacations to neat places like Yellowstone, and they lived in a house that had central air conditioning — all things that were not part of my family’s everyday life.

They were the first in our family to get color television —  at a time when not all shows were broadcast in color — and often, they would invite us to come out to their house to watch television.  Shows like A Charlie Brown Christmas, or The Wizard of Oz — which I didn’t know was bursting with color until I experienced it at Aunt Jo and Uncle Bob’s house.

And while I now know that my aunt and uncle weren’t rich, at least in the way that I once imagined, I see that they were rich, and still are rich, in ways that matter more than money.  Just like the color television set they shared with their poorer relations, my aunt and uncle colored my world with all sorts of nice memories, some centered around the holidays while others just made the everyday more special.

To recount these memories shrinks their importance, makes them seem so little when they were not.  How can I convey my excitement when my aunt stopped by our house to chat with my mother on her way home from work?  Or  when my aunt and uncle picked up my brother and I to take us to the movies with my cousins — where we saw movies like Bye, Bye, Birdie and Summer Magic?

4 thoughts on “Color My World”