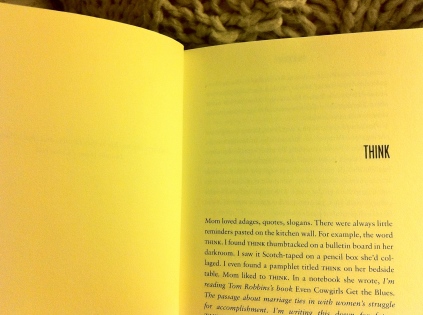 Not think, but THINK.

How can a memoir, a novel, and a book of compilations on the writing life, intended to instruct and inspire — as different as they could be by the look of their covers — be so united in their thinking?

“Mom loved adages, quotes, slogans.  There were always little reminders pasted on the kitchen wall.  For example, the word THINK.  I found THINK thumbtacked on a bulletin board in her darkroom.  I saw it Scotch-taped on a pencil box she’d collaged.  I even found a pamphlet titled THINK on her bedside table.  Mom liked to THINK.  In a notebook she wrote, I’m reading Tom Robbins’s book Even Cowgirls Get the Blues.  The passage about marriage ties in with women’s struggle for accomplishment.  I’m writing this down for future THINKING…”

The importance of thinking to Keaton’s mother grew with her diagnosis of Alzheimer’s.  Just as Minot’s character, Ann Lord, magnifies the disjointed THINKing of the dying, while lying bedridden during her last days of cancer.

“The world shifted as if a piece of paper had been flipped and she was now living on its other side.  Things turned transparent, the man one married, the house one lived in, the bracelet one wore, they all became equal to each other, equal motes of dust drifting by.  Strange things were happening something has already happened.  For two days a leaf the size of a ham hung in the air one foot from her face.  She grew sensitive to the different shades of white on the ceiling.  Her sense was not always right.  The position of her arm had something to do with inviting people to dinner.  She needed to move the pillow so a boat could dock there.   She knew it wasn’t logical and wondered if the drugs were obscuring things then it seemed as if the drugs were making it easier to read the true meaning.”  [page 23]

I find Minot’s prose beautiful and the slippery loose thinking of the dying mother believable — that steady stream of consciousness with drip, drip, drips of lucid thoughts — since it reminds of my own weird thinking when lying in bed ill, when one is too sick to do anything but lie and think.  But in truth, too sick to think too.

Then there’s that third voice, that of L’Engle {Herself}.  In introducing her work of compilations on the writing life, Carole F. Chase tells of L’Engle’s workshop teaching days at Wheaton College in the seventies, and of L’Engle’s favorite first assignment:

“Pick a biblical character and then write a midrash about him or her.  These are the rules: You may think as long as you like, but you may write for only half an hour.  Tomorrow you will share these stories with each other.”

And this second one, that followed:

“Write about one of the happiest times in your life.  Think all you want, but you may only write for half an hour.  Bring what your write to class tomorrow.”

No need for Chase to tell the story of L’Engle’s third assignment.

And perhaps, no need for me to pick up a fourth book anytime soon?