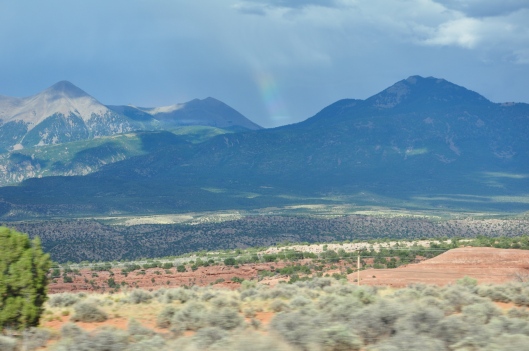 On the road to Utah

As morning temperatures hover at half-mast of summer’s high, I’m wondering how we’ll remember this hottest season on record.

Will it be for the sixty-five days of triple digit temperatures endured since June?  The crop failures?  The cost of hay this fall?  The lawns that look like hay?  The water rationing and surprise visits of city auditors — to ensure we play by the rules?

Or will it be something of a personal nature, hitting closer to the heart?

I imagine the year’s extreme weather patterns will serve as mere backdrop for me, given the upheaval from changing residences.  All the accompanying renovation work, both inside and out, would be a worthy contender for defining this summer — were it not for other half-mast matters closer to life’s quick.

Do I write of them?  No, better not.  Best to skate across their surface and leave them undisturbed.

Needing a change of scenery, we got away last week, though not to either of our original  destinations.  About this time last year we booked a Mediterranean cruise.  Then there was that vacation I dreamed of last autumn and into winter, which would have whisked us to upstate New York — the place of my father’s birth — and to Vermont, where I had just discovered three eighty-something year old cousins.

Interesting how plans — and even people — can shrink and stretch in importance, as we wear out our days on earth.

Without so much as a backward glance, I tossed Greece aside when we purchased this new house, while the trip to New England lost gas as it drew near for take off.  And when it came time to commit, the only vacation I really wanted to take was to Utah, to visit my father’s only sister.

I told my brother in July I had a hankering to see her one more time.  But it was more than that.  Way more — since some mysterious something was urging me toward Utah. One minute I had no desire to go.  And in the next, I was calling Sis and asking her to come with me.  Then asking my husband if he’d like to go too.  And when they both said yes, I called Aunt Carol.  And then before another dream vacation could die stillborn, I shored it up with seven nights of non-refundable accommodations.

This hurried response was born out of ignoring two similar calls before.  The first, four years ago, came the weekend before Mom’s unrecoverable stroke.  Out of the blue, I began to feel uneasy, began sensing a mysterious urge to drop everything to go see her.  But rather than give into the unexplainable, I pushed back with rationalization.  Then, three years later it happened again.   I felt a pull to visit Aunt Jo, a few weeks before her death.  As I drove by her house without stopping.  I had no desire to ignore this thing a third time.  And though it had been years since I’d seen Aunt Carol — until last week, almost a biblical forty — I had to go and see her, even at the risk of a little awkwardness.

Yet, how comforting and safe it feels when we’re around those who’ve loved us from birth.  For in spite of its eternal nature, there’s a tenderness about their love; no matter how many times we fail at life, no matter how long the separation, their love of us endures without judgment.

On the night of our arrival, she welcomed us with a home cooked meal.  When it came time to leave, she asked us to stay ‘one more day.’  As for the not-so-gooey middle, we filled our visit with stories and photos.  Old ones.  New ones.  Hers.  Ours.  Funny ones, sad ones.  The three days together made the years apart  unimportant — and the visit unforgettable.

Of course, Aunt Carol was far from hovering at half-mast as I feared.  So who knows where that urge to go see her came from or what it was about?   Because she looked good.  She looked happy even, in spite of  many, many reasons not to be.

And what’s more, since coming home, I’m begun to feel a little more like myself — in spite of those few unmentionables flapping in the wind.

One story, regardless of how good or bad, begets another.  And to tell “the rest of the story”  — to borrow that well-worn but never boring signature phrase of fellow Oklahoman Paul Harvey — of what transpired in my living room after my dear sister’s and aunt’s arrival on Saturday is better accomplished with camera than word:

Two days later, the change is still hard to absorb, especially given how quick it happened.  One might think it’d take a good eight hour day to achieve these results, but instead, it was closer to two; all total, Auntie and Sis were here four, with half the time spent at lunch and shopping at one of Sis’s favorite home furnishing stores.  Of course, Sis didn’t buy a thing but both Jane and I walked out with arms full of purchases.

Sis’s decorating process is hard to describe; but I can report she’s not timid about it.  She begins with big bold changes, attacking trouble spots first; at the top of her list was what to do with the hulking French armoire my husband and I do-si-doed around the room, the night before I called her.  No small piece this, it could only fit in three spaces.  A quick scan of the room led to instant decision and minutes after she walked in the door — I kid you not — the problem child was put in its place, just a few feet down the wall, providing immediate balance to the overall room.  I didn’t even realize the south side was heavy until Sis balanced it with a few big shoves.

Sis made the rest look as easy:  she centered the couch on the fireplace, traded a sofa table with a blanket chest and sent two chairs north toward the dining room to balance the armoire.  Then there was an hour of fine tuning with accessories — Sis selected from candidates I produced, placing each carefully into the scene, like pieces on a chessboard.  Her objective was to make whatever she grouped look attractive from all angles.

Watching the makeover reminded me a little of that familiar scene in the movie Mary Poppins, where Julie Andrews restores order in the children’s nursery with quick snapping of  fingers while singing “A Spoonful of Sugar.”  Of course, Sis didn’t snap or sing but made her snap changes with good old fashion heavy lifting.

Yet, I don’t think Sis fully realizes what a gift she has and is.  What for me is easier “said” than done — for Sis —  is easier done than said.  Isn’t’ that the beauty of working with others — even leaning on others when need be — since we become more balanced by borrowing strength from another? 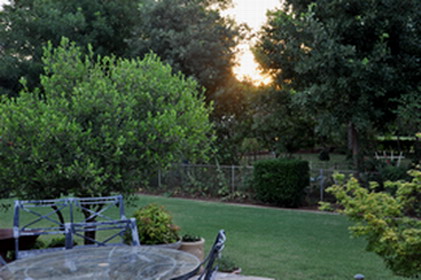 “Life is relationships.  Everything else is just moving furniture.”  — Sister Elizabeth Molina

My sister and aunt are coming to save the day on my living room, which for the moment, bears an uncanny likeness to “Grandma’s Attic.”  My grandmother didn’t have an attic but if she had, it might have looked like my living room.

Saying Sis will ‘save the day” sounds a bit dramatic, especially when the phrase marries the task of rearranging furniture.  But the words just slipped out on to this white digital space, so here they will stay, in spite of reminding me of all those Saturday morning cartoons of my youth — the likes of Underdog and Superman and Mighty Mouse and even Rocky and Bullwinkle, who not only saved the day but saved their cartoonish worlds from evil.

This trinity of words stops me to wonder how many people we know — either now or ever — that could easily bring to mind this phrase.  In my life, it was Mother, for one.  With Father’s Day tomorrow, I wish I could say it was Daddy, but it wasn’t.  Daddy had his place in my life but it was not saving my world.  If anything, Daddy was one in need of being saved.

No, in her way, it was Mom who saved Daddy just as she saved us all.  She saved the day for many, especially in her prime, with all her wonderful bag of tricks — sewing, painting, restoration — but mostly just by dropping everything and showing up in my life and others  to set things right with her rock steady presence.

Sometimes, of course, Mom couldn’t put things right but it didn’t keep her from trying.  Over and over again she picked up the pieces of my brother Jon’s life — picking him up at Crack Houses, picking up Jon’s low self-esteem as best she could, picking up his trail of hot checks left all over town with money borrowed from others.  Only to have the entire ‘save the day, save his life’ routine begin again — over and over in endless waves of need — until Reality hit.

The summer before she died, Mom came to realize, that no matter how hard or often she tried, she’d never really be able to save the day for Jon.  Sometimes I wonder if this played part in her readiness to quit life here, to leave Jon’s messy life to bigger hands than hers, to someone that maybe really could save Jon.  Reality’s a hard thing to swallow even for superheros; so why am I now  suddenly recalling those ancient words whispered by another in a dark garden, with a trinity of friends sleeping on the job  of keeping watch nearby?:  “Father, let this Cup pass from me — yet not my will but yours be done.”

What a brave thing for anyone to say — to admit one’s vulnerability, to give up pride, all semblance of control and their bag of tricks, especially with an angry mob bearing down on them.  Instead, this Savior chose to trust in the goodness of an invisible Father; he chose to believe that all will be well in the end, in spite of  current evidence to the contrary.

I do miss my mother, especially when I think of how she loved me no matter what.  How she judged me not.  How she took me as I am and not as I could be.  Or should be.  Maybe I loved her most for all of these because in these ways, she bore the greatest family resemblance to one greather than her, whose sandals she was unfit to tie.

And in my life, on this day, where my living room needs saving and furniture needs to be shuffled around, Sis bears a huge resemblance to my mother and Father.  I’m so glad Sis is coming, and bringing our auntie with her, whether or not we move a single stitch of furniture. 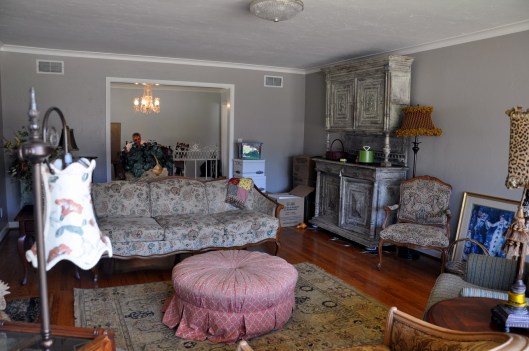