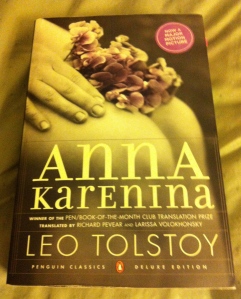 I can’t remember what we were talking about last July in class, when the thread of discussion turned to Tolstoy’s, Anna Karenina.

But two things I do recall.  One, that I was the only student, out of a class of twelve, to confess I’d never read it.  And two, how ready I became to read it, upon hearing my writing instructor’s passionate response:

“Don’t deny yourself this pleasure.”

What else shall I say, dear reader, about my delicious splurge in reading this novel? The one I’ve had to set aside, with great gnashing of teeth, for a few days in order to satisfy other commitments.

One thing for sure, I’ve no interest in summarizing the narrative dream created by Count Tolstoy’s delightful tale.  I know my limits.  I cannot do it justice.

But I can’t say enough about how much I admire Tolstoy’s ability to transport me to late nineteenth century Russia, to make me feel as if I’m eavesdropping on everyday conversations on matters of the heart.  And not just love and marriage and divorce — but rather, it seems, anything and everything that could be of passionate concern and interest to 1870‘s nobility: The many references to then contemporary artists; the philosophical discussions and scholarly arguments about theology and communism; heated exchanges about women’s rights and education of the masses; the colorful mishmash of opinions on best agricultural practices in the face of a Russian labor force entrenched in old ways of doing things; even spiritual practices and devotion are touched upon.

Gosh, it just feels so relevant.  Is there truly nothing new under the Sun?

And the way he writes, in such intimate tones, as if he were telling the story to me alone.

And the writing skill he draws upon in using contrasts of threes, in order to paint readers a huge canvas of Russian life.  We have three couples, in various stages of marital bliss.  Or not.  Three vocations:  Gentlemen farmer, government bureaucrat and career military.  Three locales. Two cities, Moscow and Saint Petersburg.  And some slice of heaven somewhere far out in the rural farmlands where some of my favorite passages have laid.  LIke this one, told from Levin’s point-of-view:

“Spring is the time of plans and projects.  And, going out to the yard, Levin, like a tree in spring, not yet knowing where and how its young shoots and branches, still confined in swollen buds, will grow, did not himself know very well which parts of his beloved estate he would occupy himself with now, but felt that he was filled with the very best plan and projects.”   [page 153, Penguin Books, 2000, translation by Richard Pevear & Larissa Volokhonsky]

Oh, I understand Levin, well, because I too, am Levin.

So, now, as I put aside my novel, I console myself that I am no worse off than Anna Karenina’s original readers, who also were forced to do without, while waiting in between, for the next installment to be published. Why I wouldn’t be at all surprised to learn that they, like us, took time to share thoughts between reading installments.

And though it will be lovely someday to reread Anna, for now I feel darn lucky to be a new reader.  Because I can’t say what will happen next!

Why the whole being on the edge of my seat thing reminds me a lot of following Downton Abbey.

— POP OVER TO RIPPLE EFFECTS TO READ ARTI’S REVIEW AND FOR LINKS THAT WILL CONNECT YOU TO REVIEWS OF OTHERS.