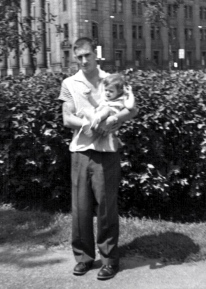 My young father and me – Albany, I think…

It wasn’t my intention to fast from the blog for a month, though a few weeks ago, I did decide to skinny-down life to better prepare for the Iowa Summer Writing Festival.

It wasn’t difficult.   One early in May morning I woke up and drew a few lines in the sand to make my sandbox a little smaller.  Inside was everyday life and my father’s story.  Outside the box was everything else — including my beloved home and garden restoration projects — no matter how many fabulous mid-summer plant sales that are bound to come up to tempt.

It’s a case of doing first things first.  Focusing on what I would be most sad to leave undone in this world, in the event I die sooner than later.   Because who would write Dad’s story if not me?  Who knows it or cares to know it in its scattered and torn state?  Who would give it their all and then some?  And really now — as much as I adore home restoration projects, none of them have quite made my heart sing like working on my father’s and aunt’s childhood story.

The fast month of May taught me much.  Not only my growing knowledge of my young father and aunt and their life — but much about me and my life — why the more I cozy up to my young father, the more I see how Mother was right, when she’d so often say, by way of explanation to others — was it with a slight disparaging note? — yes, I think so:  ” Well.  What can you expect? … She’s just like her father.”  Today I respond by saying this state of ‘two peas in a pod’ being, between Dad and I, may become my trump card to taking on this most seemingly impossible task of my life.

So between now and mid-July, I’ve advance work to finish and submit — partly because it’s assigned and partly because I wish to get the most I can from this writing experience my husband is giving me.  And though I don’t intend to absent myself from the blog the entire month of June — I’m here today, aren’t I? — I just wanted you to know what’s up in my not so everyday life at the moment — in case you’re interested.

Ten years ago, I asked God to give me a story.  As prayer goes, it was childlike:  Short in words — tall in dreams.  And as best as I can now recall, it went something like this:  God, if you give me a story to write, I promise to write it.”

I’m not sure Dad’s story is IT but I think it is.  Because it would be just the kind of answer to prayer that would fit a Godly sense of humor — since the story has been as close as my father’s hip pocket all my life.  I only wish I’d realized it sooner.  I wish I’d realized it before Daddy lost his voice to tell it.  But since wishes don’t always rise to the level of prayer in my life, here’s praying I can become Daddy’s voice.  One more time.  Because life goes fast and some stories were lived to last longer than a lifetime.