The cover of the old paperback came worn.

More than a slight musty, it was lovely anyway, a dusty pink on both sides, except where edges had frayed and the pink had curled back into the crinkled parchment beneath.  In these threadbare spots of its reduced state, it wore the color of old undergarments, many washings faded.

The cover was bare of words, offering no hint of its subject matter or author. Yet, in spite of great age, the spine and binding held tight to its pages.  Each sheet felt heavy though only few showed signs of heavy pressing, and on these, French words rose up like goose-flesh on thick skin.

Opening the book to the title page, my eyes ran down lines of words written in an unfamiliar tongue, before tripping over the last two — “Voyage du jeune Anarcharsis en Grece,”  “En Grece?”  “In Greece,” it read.  This old paperback, published in 1789, —  which I’ve since come to know written by Jean Jacques Barthelemy (1716–95),  — describe on Wikipedia as “a highly esteemed classical scholar and Jesuit” — had traveled many miles and years to find a new home with me.

I won the book through a blog giveaway entered January 12th.  It had been a long spell between prizes.  Ignoring two winning hands at a San Juan Blackjack table in the mid-eighties, I was thirteen last time I’d won anything.  But, oh what a win that was.  The prize was a true sign of the times in which I lived, since I received two free tickets to go see and hear the Strawberry Alarm Clock perform in Oklahoma City.

Like the paperback, I won these by random draw; a DJ of a local radio station picked my entry form out of a small box parked on the customer service counter of the grocery store where Mother shopped.  I’m guessing there were few entries that day.  Most Buchanan patrons were not hip — like my parents, they tended to gravitate toward a different period of music, where the meaning of lyrics were easily understood and where words were sung rather than screamed.  Buchanan’s patrons would not have recognized the Strawberry Alarm Clock as the name of a sixties psychedelic rock n’ roll band.  Nor would they have recognized the band’s music as music.  In other words, I had excellent odds of winning that day.  My name may have been the only one in the box.

Yet, I don’t think I had any thought beyond winning.  In my young mind, I never imagined I would go or wouldn’t go.  But if lucky enough to get my hand on those tickets, surely I dreamed of going.  And when I did win, it seemed a clear sign that somehow — in spite of being too young, in spite of having a pair of Southern Baptist parents wary of all the dangers of drugs and booze and the make-love-not-war mindset of the sixties — that somehow, I would go.  Somehow, I would hear this up and coming band on the music scene sing their one hit single live.

But no, somehow never happened.  So somewhere in this house, buried amongst all the scraps and photo treasures of my life, are two unused tickets to that 1968 concert.  And the shame of it?  The shame behind that somehow is this:  that I never ever raised the question.  Oh, to be sure I would have dropped huge hints hard to ignore — for anyone but a parent wishing to dodge sticky situations — but I never spoke the question to life.  There was no “Can I go?”  I never made my parents tell me ‘no.’   Somehow, my dream died a natural death as we all do —  it just ran out of time, that’s all.

Last night, remembering those unused concert tickets, I went to the living room —  where my paperback had laid for the last week — and claimed my newest prize.  And carrying it to the computer, I began to wonder about its origins and how it came to live with me and whether this antique paperback about Greece might symbolize another ticking alarm clock, trying to wake me up from a dream.

I thought about my Greek grandfather and his stories and the stories of his children that my aunt spent hours sharing with me in the months following Daddy’s death.  And I remembered before last year’s move, how I’d hoped to begin writing the stories down, so that Aunt Carol would be around to help edit away inaccuracies and embellish the story with rich details that only she could.

And I thought of everything that had come to pass for this book to arrive at my door last week — how on January 12th, I was inspired to leave a rare comment on a blog that I’ve tuned into everyday for a year for the pleasure of easy ‘listening.’  I thought of how the blog author that day was inspired to write a post, titled, “Yes You’ve Got a Story to Tell – Giveaway.”  And how before she even wrote that post, how she’d been inspired to buy my old paperback at the Brocante fair she frequents most Sundays.  And how her purchase that day had depended upon the antique dealer’s recent acquisition of an estate.  And then I thought of that long string of book owners — over 200 years of ownership deep — who had decided to keep rather than toss the book aside.  And finally I thought back to before 1789, to when the author decided to write this story, about a young man’s journey to Greece, and how he chose to tell the story in the form of a travel journal.

Somehow, all these thoughts siphon down to one last drop of thought — how one hundred years ago last May, my Greek grandfather arrived in New York as a young man with little more than a dream in his pocket.  And though he never bothered with travel journals, he left plenty of footprints — plenty of stories, that for the last year, have been asleep in a storage box in my closet.  Strangely enough, one story Aunt Carol told had to do with stories Daddy had written down in red ink about his life on the road, traveling with my Greek grandfather.  That story ended sometime around 1944, when Daddy was a young man, when he decided to toss it all away into a Kansas City garbage can

I’m thinking it’s time to wake some of these slumbering stories up — and time to push the snooze alarm off so that I can wake up from my dream — how maybe its time to grow thick skin — and stretch the boundaries of everyday life to encompass a larger map.

Can I go?  Only the prize of time and a few worn down alarms clocks can know the tale. 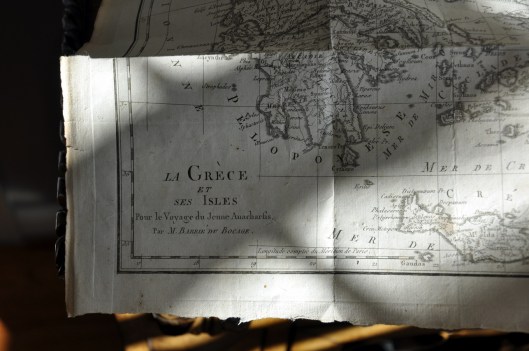 2 thoughts on “Alarm Clocks and Prizes”