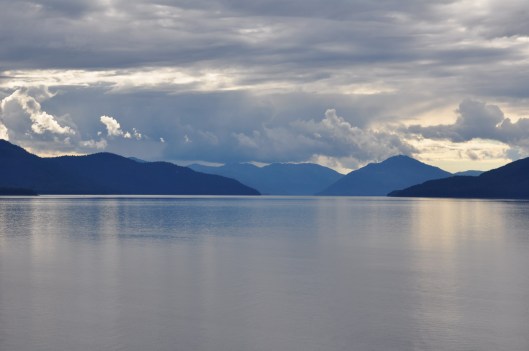 Alaska’s beauty robs me purpose, of the small discipline I normally possess.

Tuesday’s mission was whale watching.  Yesterday’s was to wander the streets of a third coastal town.  Today’s intention remains unknown.  All I know for sure is that thoughts of home are stirring …and that, as nice as cruising is, one day and town run into another.

Was it Tuesday or Wednesday?  The question generated big discussion at dinner two nights ago; the question was settled by the calendar on someone’s watch:  It was Tuesday.  Instead of days of the week, ports of call mark time on board.   Tuesday was Icy Strait Point, Wednesday was Ketchikan.  Today we are cruising along time and space, set loose upon the seas.

Activities too, partition time into 45 minute intervals.  Wednesday, after touring Ketchikan, we gathered for afternoon activities; my husband and I learned the basics of Italian in the first set of 45; later, we played another 45 of “Name That ’80’s Tune” trivia game.

Would you believe two young things from Jersey won?   These girls were wearing diapers and running around a school playground when these songs were first spinning from a turntable.  But yesterday the tables had turned – the songs, once ours, we no longer knew by name, no matter how many notes streamed from the IPOD.

The competition was good.  And though fair, it wasn’t pretty.  Had my mother seen it, she would have called them bad sports – and she would have said it loud enough for everyone to hear.  Every time they jotted down a correct answer – about 17 for 20 — they scanned their competition.  And finding stumped expressions, they’d taunt their poor feeble minded competitors with, “Come on, you guys grew up with this music.  I can’t believe you don’t know this one.”  They took the prize, these two from Jersey.

Of course, the best prizes don’t come from shipboard games.  One of mine came in Tuesday’s port of call.  A picture postcard setting — periwinkle seas shimmering silver from sun dripping through clouds, the ocean mirroring a faint outline of distant mountains – fading into background when, not fifty feet from where I stood, a beautiful Humpback Whale broke through the sea’s surface.  As her head skimmed the waters beside us, she blew geyser mist above her blow hole, disturbing the quiet with a giant rush of air.

Taking deep breaths is preparation for cruising along time and space.

6 thoughts on “Cruising Along Time and Space”