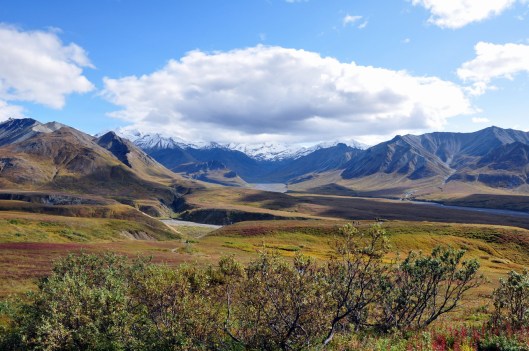 There is talk of snow arriving in Denali Park Village today.  In two weeks, the last tourist will depart.

The little village that sits just beyond the entrance to Denali National Park, exists solely to support tourists; no restaurants or shops remain open in the off-season.  Before leaving for winter, maintenance crews will board up windows and wrap street lamps within protective covering.  The village will close and fold up like a board game.

For now, end-of-the-season sales keep workers somewhat busy as they talk of going home.  Wherever home is, it’s not here.  Thursday morning’s bus driver will return to Alabama.  Wednesday’s gift shop worker hails from South Carolina.  Wednesday night’s young waitress hopes to land a job in Germany; if not, she’ll migrate to Costa Rica where her uncle has a home.  The Park will return to its home state too; inhabited only by wildlife and Park staff, it will go home to quiet.

The national parks face a challenge in making this wild land and its inhabitants accessible without spoiling them or us.   With over six million acres of land — most accessible only on foot — Denali strikes a fair balance.  The sole Park Road we traveled by bus Wednesday — 92 miles long — begins paved at Denali Park Village.  Fifteen miles in, the road narrows and turns to gravel.  Only buses and those granted special permits — a minimum three night stay is required — are allowed to travel the unpaved segment.  Limiting vehicle count keeps the road passable and wildlife less disturbed; whenever and wherever vehicles meet wildlife – even on top of hairpin curves tottering above land — traffic stops and engines turn off. 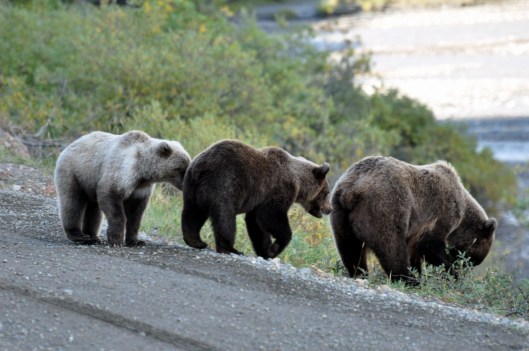 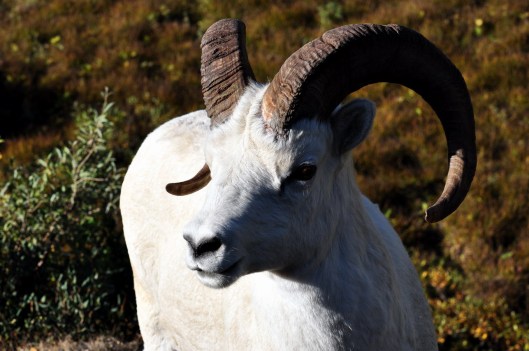 How she drove the bus up and down switchbacks and tight hairpin turns, while spotting wildlife out of the corner of her eye, unnerved me – I wouldn’t have minded had she’d kept her total attention on the road. 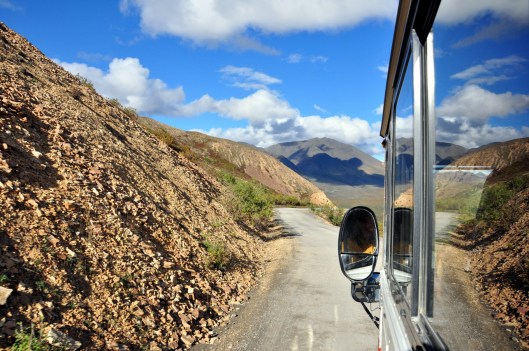 But she knew best.  This wild land was once her home.  Balancing gas pedal nerve with braking caution, she was in tune with the land and its wildlife, a testament to what the Alaskan wilderness had made of her.  As she drove, she shared stories of her “bush country” life.  With her husband and four children, she lived on homesteaded land in a 16 x 16 foot cabin.  They lived lean — self-sufficient as possible — since their closest neighbor lived 50 miles away.  They hunted.  They made and wore clothes from Caribou.

In winter, they traveled by dog sled, courtesy of sixteen sled dogs.  In summer melt, they canoed waters seventeen miles to their fish camp, which became home for summer.  They fished commercially to buy in bulk, staples like flour and rice.  They bought enough for nine months and stored it high in a cache – a small shed that sits on stilts – to keep it safe from bear raids.

What were her reasons for leaving?  I wish I had asked.  Though maybe I didn’t, since I sensed her reasons lied with the husband she spoke of in past-tense.  For now, she is happy living eleven miles north of the village, mothering her eleven year old son and driving buses year-round – tours in summer, a yellow school bus the rest of the time.  When the time is right, she’ll return home.  Like us.  But not like us.