Do you remember that old sixties song sung by Leslie Gore — the one that began “It’s my party and I’ll cry if I want to…?”

Well, today was my official family birthday party.  My daughter Kara worked behind the scenes for over a week to bring everyone together and asked Amy to honor us by bringing the birthday cake.

Amy bakes the best cake.  It doesn’t matter which cake that steady girlfriend of my oldest son whips up.  If Amy’s involved, it’s guaranteed to be a taste delight.  When Amy hosted September’s Moveable Feast, she baked a three-layer Carrot Cake.  And I told Kara then that Amy’s Carrot Cake was the best I’ve ever eaten.  What I didn’t know was that I had just placed my birthday cake order with Kara and Amy.  Those girls…

Well today, the lovely cake was here and Amy was here and my sons were here and my husband’s parents were here.  But not Kate and Kara.  They both called in tears —  too sick to come.   Kate decided half-way here that she better turn around; poor Kara never made it out of the garage.  Kara left her sick-bed to get ready for the party, but realized early in the process that she was worse than she had known.

I felt bad for Kara.  Imagine planning a party and then being unable to come.  I hated Kara’s absence more for her than for me.   So as a consolation prize – because that’s what Moms do — I prepared Kara a little care package of  fresh rolls and broccoli-cheese soup and a generous hunk of Amy’s Fabulous Carrot Cake and some of my husband’s delicious home-made Cinnamon Ice Cream.  And Amy and Bry dropped it off on their way back home.  And while I missed seeing both girls, I was really glad that they stayed home to take care of themselves.

And the party was so lovely, though I confess to being more than a tad embarrassed that I’ve milked this birthday for all its worth.  But certainly not enough to cry about it.  Fasting through lunch gave me plenty of tummy space for an undainty portion of Amy’s cake and my husband’s ice cream.

So now this milked-it-for-all-she-was-worth birthday girl is all smiles.  I’m so happy that it makes me think of that other Leslie Gore song of the sixties that I liked so much — Sunshine Lollipops and Rainbows. 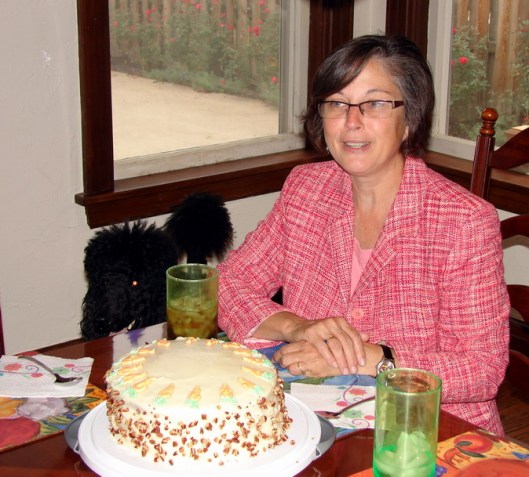 Max and Me Admiring Amy's Cake

And what do you know.  Just like everything else, this song is right at my internet fingertips.  So I dedicate this Leslie Gore song to Kara, for all her hard party planning work.  And to Amy for a great tasting cake.  And to my husband for making ice cream.  And to the boys and Grammy and Papa for helping me celebrate.  And to Kate, for sending me birthday wishes without germs — and her promise of a belated birthday lunch soon.  I look forward to it honey.

Because of you and you and you, “my life is sunshine lollipops and rainbows'”…”everything that’s wonderful is what I feel when we’re together.”