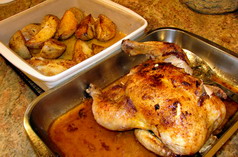 The chicken is roasting in the oven; the potatoes are ready to go in.  It’s a quick meal — we’ll be eating in two hours, maybe a little more.

This meal brings to mind many surprise Sunday suppers from my childhood.  It was an unspoken rule of the house that mom didn’t cook Sunday nights.  We had little reason to complain, having enjoyed a big Sunday lunch—pot roast if we were home, as it was a meal that cooked itself while we were at church, or some huge fried chicken dinner if we’d gone to Granny’s house to visit family—then for supper, we’d eat something simple, maybe leftovers or a Western Egg Sandwich–another one of Papa’s specialties.

But some Sunday evenings, we’d arrive home to find this roasted chicken and potatoes waiting in the oven.  I think Papa liked to cook when he was home alone.  It filled the empty hours and made the house smell all lovely and homey, just like mine smells right now.  And who knows–perhaps after eating mom’s cooking all week, he was hungry for a taste of home.

After Papa’s death, Mom continued to make this meal, as I did in my own home when the kids were growing up.  Like a family tree, this one connects me to a past beyond my memory and maybe someday, to the future in the homes of my children and grandchildren.

If a recipe is good enough, it can survive in an unwritten state for years, as it’s handed down from generation to generation. But this one deserves to be in writing, so it can live on its own.

Preheat oven to 350.  Rub chicken lightly with olive oil and season with salt, pepper and liberally with paprika.  Cut 2 T. of butter into small pieces and place all over chicken.  Set in baking dish (or cast iron skillet), coated lightly with olive oil, and roast in oven for 2 hours or until juices of pierced chicken thigh run clear.

Meanwhile, sauté potatoes in remaining melted butter and olive oil, in a cast-iron or other oven proof skillet, over low heat for 20 to 30 minutes until brown and crusty.  Set aside.  After chicken has roasted for an hour, put potatoes in oven and cook for a hour, until fork tender.  The chicken and potatoes will finish roasting at about the same time.

Take both out of oven and cover with foil, letting chicken rest for at least 10 minutes, then squeeze fresh lemon juice on both potatoes and chicken before serving.   Serve with a nice Greek salad and crusty bread.

Note:  Original recipe called for a cup of butter, rather than half butter and olive oil.  Also, potatoes were cooked around the chicken rather than in a separate dish.  I’ve made these two modifications to skinny it down – without sacrificing flavor.